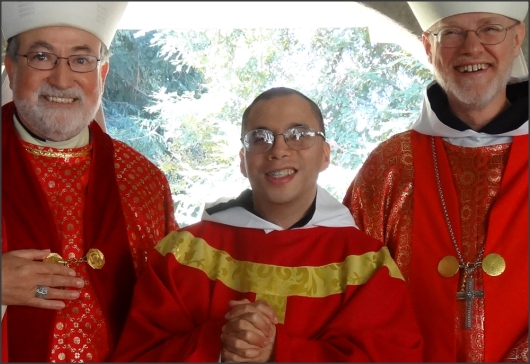 "I never doubted my calling all these years, because it became less about myself and more about the path to be more like Christ," he said in an e-mail interview before his solemn profession. "My hope for myself is to keep on growing in my vocation and ever deepening my bonds with my community and of growing more in union with God."

Father Placid, one of triplets whose father John graduated from SMC in 1966, fondly remembers his time at Saint Mary's, where he enjoyed walking to Our Lady of the Oaks and the bridge behind the gym. He was a member of the Chapel Choir.

Brother Brendan Kneale recalls that when Morris entered the Integral Program as a freshman, he asked, "Is this program a good one for those who want to become priests?"

"Frankly, we were caught flat-footed by this unusual question," Brother Brendan said. "Finally, Brother Raphael Patton said, 'The Integral Program is good for all professions.' This reply seemed to satisfy Jeffrey, and he went on to earn his degree from the program and to do a senior essay on contemplation."

The Integral Program helped Father Placid appreciate books for their own sake. "In a way, it prepared me for the formation program here in the monastery, to let myself be formed by what I read, challenge my own views, and be willing to grow beyond my own resistances to the prompting of the Holy Spirit."

"He finally decided that the contemplative side was the one which offered the most direct route to friendship with God," Cortright said. "He was pretty clearly in love with God and with the idea of the religious life when he was a student."

Like many Trappist monks, Father Placid was influenced by Thomas Merton's No Man is an Island, which he read during his sophomore year. At first, the Trappist life seemed "too much for me," but he went to the Abbey of New Clairvaux in an independent study for Jan Term while at SMC, and decided to pursue the vocation.

"As daunting as it can be—this life—by making ourselves more available to it and to God, it can be a great source of delight," Father Placid said.