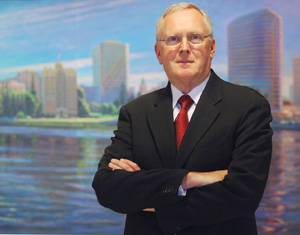 Following the Sept. 11 terrorist attacks, the Federal Aviation Administration and the Department of Justice launched a massive investigation to root out pilots who had lied on their applications to fly. In 2005 the agencies named 40 Northern California pilots who allegedly had done so and summarily revoked their licenses. One of those pilots ensnared in Operation Safe Pilot was Stanmore Cooper, a longtime recreational pilot who had not disclosed his HIV-positive status to the agency.

Cooper, a San Franciscan who had only divulged his medical status to his friends and family, suffered "humiliation, embarrassment, mental anguish, fear of social ostracism, and other severe emotional distress" as a result of the investigation, according to a complaint he filed against the U.S. government in 2007. The Social Security Administration, he added in his complaint, had illegally shared his confidential medical records with the FAA to unearth his HIV status.

"Stan was really offended at what the government had done," said James Wood, a longtime product liability attorney at Reed Smith who agreed to take Cooper's case pro bono. "They had violated the privacy rights of thousands of pilots."

In 2008, U.S. District Judge Vaughn Walker agreed. But he threw out the case, ruling that Cooper was not entitled to monetary relief for emotional distress under The Privacy Act of 1974.

"If you don't award compensation for emotional distress, then you have a right without a remedy," Wood said in his appeal to the Ninth U.S. Circuit Court of Appeals. "That would give the U.S. government free rein."

Last February, a three-judge panel of the appellate court unanimously sided with Wood and his team at Reed Smith, ruling that Cooper could seek damages for harm suffered at the hands of the federal government if it intentionally disclosed his confidential medical records. In September the Ninth Circuit denied a petition for en banc review, but it was a close call. Eight judges signed a dissent by Judge Diarmuid O'Scannlain, who opined that the decision could open the floodgates for claims against the government.

Wood, 62, said Cooper initially had a hard time finding a lawyer to take his case, particularly because he admitted that he had not divulged his HIV status on his pilot's license — a misdemeanor crime that resulted in a small fine. Fortunately, Wood said, Reed Smith agreed to let him take the case as far as it might go.

Wood is a member of Reed Smith's life sciences health industry group. After getting his J.D. from University of San Francisco School of Law in 1973, he spent two years as a research attorney for Alameda County Superior Court. He then joined Crosby, Heafey, Roach & May, which merged with Reed Smith in 2003. He litigates cases involving prescription products, medicines, devices and vaccines, and has another potential blockbuster coming this year: a case before the California Supreme Court that will determine whether only licensed nurses can administer insulin injections to schoolchildren.

Wood took Cooper's HIV status case at the request of the San Francisco AIDS Legal Referral Panel. So far, he said, it has involved privacy and national security claims as well as hard-fought and time-consuming discovery disputes. He also called into question the hastily drawn Homeland Security policies.

"For years, there was a government ban on anybody with HIV flying a plane," he said. "Why is that?"