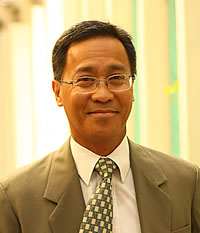 ALFREDO J. Luz Sr. (1922-1989) was arguably the most prominent architect in the Philippines during the 1960s, having designed a number of buildings that continue to stand as architectural icons today. Among these are the Ramon Magsaysay Center and the regional headquarters of the World Health Organization, both in Manila, and the International Rice Research Institute in Los Baños, Laguna.

He was a true liberal in thinking and philosophy. (As a political philosophy, liberalism focuses on the primacy of the individual. The measure of a society, therefore, becomes the degree to which individuals are treated with respect and given an opportunity to contribute to its development.)

A man of few words, he liked to quote three rules that reflected the deep sense of perfectionism that defined both his design philosophy and philosophy of life:

Rule 1: If you build anything, build it to last.

Rule 2: If you build anything to last, make it a thing of beauty for others to appreciate and enjoy.

Rule 3: Nothing lasts forever without maintenance.

He may have been speaking of architecture as the coming together of art and science, of form and function, but he could have been speaking about anything in this world and to any profession. These rules equally apply to teaching because they are about universal truths––quality, beauty, diligence and hard work.

What do we, as teachers, build to last?

We should be building––or forming––the mind of a child, the character of a young person, the ethics of a future adult. What we teach, we hope, will last for a lifetime. For if we can form honest and ethical individuals who lead lives of truth and integrity, they will pass their values on to their children and their grandchildren. And what ultimately would become a lasting masterpiece would be good citizenship, which is needed to weave the fabric of a strong society. If we can form persons of integrity, courage, independent-thinking and all the traits that democracies need in order to function properly, then our work would be beautiful for it would create its own equality, its own fairness, its own justice.

Regrettably, our education system, as it is organized today, is heavily flawed. It performs poorly overall. We have embedded the promise of free and compulsory basic education for all in our Constitution, yet the outcomes are different from what should be. What is needed today is a structural makeover of our education system rather than the type that focuses on mere shortages. Structural reform, however, is a long process far longer, unfortunately, than the six years of a one-term president.

In May 2010, we elected a new government on the promise of reform and change. A year ago, we gave ourselves a tremendous opportunity to send our country into a very different orbit. But it will have to be a trajectory where a number of principles are clearly stated.

Our leaders should deliver both economic growth and equity so that the benefits of this growth do not accrue to just a chosen few but to all Filipinos.

Our leaders should deliver clean government and fair markets. There can be no room for corruption among our national and local leaders.

Our leaders should abide by the rule of law and not subscribe to a two-class system of justice and rules: one for those with power, and another for everyone else.

How do we measure whether our lives have been a success?

For Alfredo J. Luz Sr., the true mark of success is to leave behind something––a world––that is better than what you inherit. As a parent, I would like to believe that my three children will be better persons than I am in every way. I expect them to be better educated, more knowledgeable about more things, more well traveled, better parents, and more successful as individuals in all aspects of their work and lives. Anything less would be a waste of their God-given talent.

For this year's university graduates, the question must be: Am I a better person today than when I started university more than four years ago? Ten years from now, we should ask the same question: Am I better in every way than I was in April 2011 when I received my diploma? If the answer to these questions is no, then I would have to do some serious soul-searching and ask myself the searing question: Why not? Where did I stop learning?

This applies to the country as well. When President Aquino steps down in June 2016, we have every right to ask: Are we better off today (in 2016) than when the President took office in June 2010?

For my father, the principle was simple and straightforward: Leave behind a place better than what you have inherited. We would be wise to apply this to our collective task of building a better Philippines.

Juan Miguel Luz is associate dean of the Center for Development Management, Asian Institute of Management. This article is an edited excerpt of his commencement address at the recent graduation of the Institutes of Education and Architecture and Fine Arts in Far Eastern University.