The Tutorials consist of 3 sequences of classes and require active participation in proving mathematical theorems, translating and analyzing texts, and observing and explaining natural phenomena. The tutorial sequences are Mathematics, Language and Music. Your inquiries into these areas will result in a complex and nuanced understanding of the human experience and the world in which that experience takes place.

In the Language Tutorial students study a foreign language and the art of translation. By exploring a foreign tongue (including 2 years of Greek) and your own native tongue you'll develop an understanding of the nature of language in general and its use as a tool of discourse. 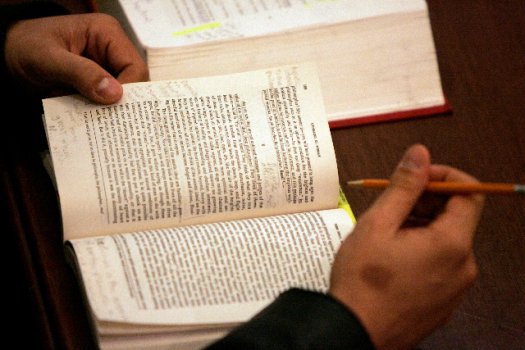 During the Freshman Language Tutorial you'll study ancient Greek grammar, examine English grammar and reflect on general questions of how language works. You'll study the nature and function of parts of speech, phrases and clauses, and receive an introduction to Eastern languages by learning written and spoken Chinese. You'll end the year by translating substantial passages from Freshman Seminar readings, such as Sappho's poetry, Aristotle's On Interpretation, Plato's Cratylus and the New Testament. By the end of the freshman year you'll have new skills in Greek translation and improved writing skills overall. At least 5 papers are required during the course of the year, and students meet individually with their language tutor discuss problems in syntax, thought, organization, and style.

The Sophomore Language Tutorial emphasizes questions of logic, especially its relationship to rhetoric and dialectic. You'll closely examine readings that not only explore the nature of language but also serve as significant examples of it. These include selections from the pre-Socratics, Plato's Phaedo, Theaetetus, Sophist and Phaedrus, and Aristotle's Categories, andPrior Analytics. You'll also deliver in-class "position papers" and lead class discussion on selected sections of the texts being studied. 3 or 4 written essays are required during the Sophomore Language Tutorial.

The Junior Language Tutorial pays special attention to rhetoric and (philosophical) grammar. You'll investigate semantics in Augustine and the Stoics; hermeneutics and interpretation in Shakespeare's sonnets; and the opposition of styles in Pope, Wordsworth and selected short stories. Students also investigate problems in translating classical Chinese texts. The year concludes with modern treatments of languages in Saussure and Chomsky and the logic and language of Wittgenstein.

The Senior Language Tutorial explores the art of dialectic, its ancient and modern uses and its inherent limitations. You'll read Plato's Philebus and Parmenides, related passages in Aristotle'sNicomachean Ethics and Metaphysics, Thomas Aquinas' On the Principles of Nature and On Being and Essence, Kant's Critique of Pure Reason and Hegel's Encyclopaedia Logic. 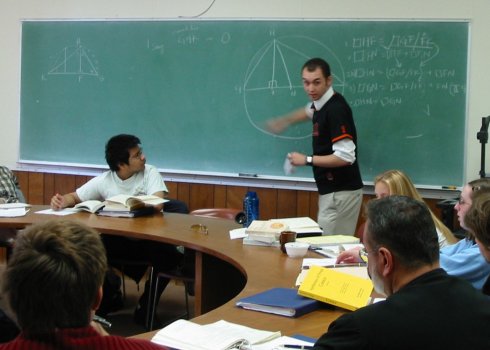 The Mathematics Tutorial will give you insight into the fundamental nature and purpose of mathematics. You'll develop the ability to take mathematical definitions and principles and use them to arrive at necessary conclusions. During your 4 years at Saint Mary's you'll study pure mathematics and learn the foundations of mathematical physics and astronomy.

You'll begin freshman year with Euclid's Elements, including the geometrical books, his treatment of number and the relation between number and magnitude. The geometrical understanding you acquire through Euclid will lead directly into exploration of Ptolemy'sAlmagest, primarily his theories on the movement of heavenly bodies. The questions you encounter during freshman year will inform your entire 4-year experience in the Mathematics Tutorial.

Sophomore Mathematics examines 2 of the most fundamental transitions in the tradition of astronomy and mathematics. During the first term you'll continue your studies of Ptolemy, eventually moving on to Copernicus's revision of Ptolemy. The rest of the year is devoted to Apollonius' presentation of the conic sections, followed by Descartes' Geometry. By the end of sophomore year students must demonstrate proficiency in basic algebra.

The Junior Mathematics Tutorial pursues questions about the continuity of motion, the infinite and the infinitesimal, and the development of calculus. The year begins with DecartesGeometry, moves on to Newton's Principia and overall creates a sweeping vision of the mechanical motions of the universe.

The first term of Senior Mathematics begins with non-Euclidean geometry and Lobachevsky'sGeometrical Researches on the Theory of Parallels. In the second semester you'll study Einstein's special relativity and energy-mass papers. At the end of both terms each tutor leads inquiries into a range of specific topics, including general relativity, Poincaré, Kant on space and time, Einstein's Geometry and Experience or Hawking's Einstein's Dream.

The Sophomore Music Tutorial develops an understanding of music through attentive listening, close study of musical theory and analysis of musical works, including Bach, Beethoven, Mozart, Palestrina, Stravinsky, and Schoenberg. You'll investigate the diatonic system, melody, counterpoint, harmony, and rhythm in both words and notes. During the lab component you'll construct and play musical instruments, compose music, and learn to sing.