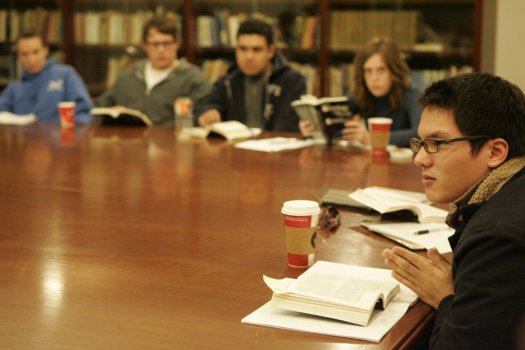 Seminars begin with a question that invites and provokes inquisitive conversation — conversation that may continue long after the 2 -hour period is over. You'll discover and develop wonder, attentiveness, judgment, imagination, openness to new ideas, willingness to be refuted, patience, courage, collegiality, leadership, and general resourcefulness. You'll develop attentive reading habits, clarity of thought, generosity of spirit, and a willingness to boldly enter unfamiliar territory. Seminar is where you'll take the most responsibility for your own learning and thereby experience the College's mission in its purest form.

Freshman is the "Greek" year. Just as the writings of Homer, Plato, and Aristotle represent the foundation of Western thought, freshman seminar establishes a foundation for the following years of study. You'll begin with the Iliad and the Odyssey, continue with the poetry of Sappho, the dramas of Aeschylus and Sophocles and the works of Plato, and conclude with Aristotle. In freshman year you'll acquire habits in serious reading, inquiry, and conversation that will serve you well as you move through the Program.

Sophomore seminar spans the longest chronological period of all 4 academic years. You'll begin with selections from the Old Testament and classical Roman poetry and history and spend the rest of the year discovering authors who in various ways tried to join, assimilate and judge these 2 very different worlds. Even for the Roman writers the question of how to deal with a partly alien tradition (that of ancient Greece) was a central theme. The year's readings are unified by common classical and biblical roots and the accumulating record of responses to them.

Senior seminar readings are the most contemporary. You'll read great novels such as War and Peace, Faust, and The Brothers Karamazov and discover American literary giants such as Mark Twain, Flannery O'Connor, Emily Dickinson, and Wallace Stevens. You'll also explore challenging philosophical texts by Hegel, Nietzsche, Kierkegaard, Marx, and Heidegger, and explore the development of psychology in the works of William James, Freud, and Jung.